Posted by: HEX 11 months ago

The Latest News from the Australian Discworld Convention

Someone, anyone, please hand the Lachrymating Leveret a tissue

Who could have known the Year of the Lachrymating Leveret would be so literal1? For those of us living on Australia's east coast it's been many weeks of the wet stuff2. Oh Summer, wherefore went thou? Ahem, wiping away a tear and moving right along... 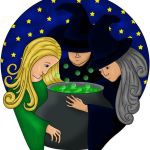 All reports from Newcastle Theatre Company's production of Wyrd Sisters were great! We hope that everyone local to the area got a chance to see it.

'So, what happens at these fan club meet ups you keep mentioning?'4 I hear you ask. The meet ups are a chance to make friends with like minded people who have that one person in common - Terry Pratchett. 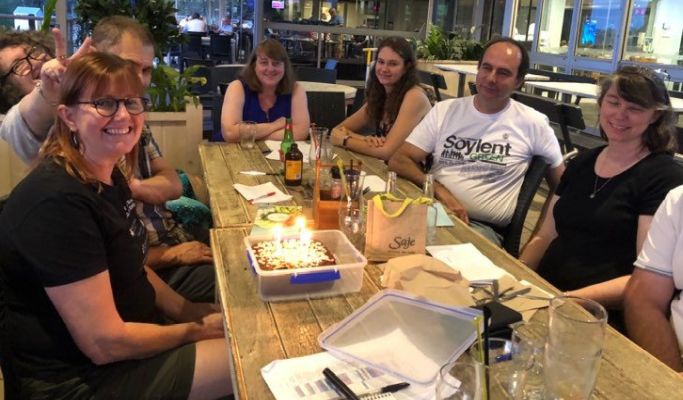 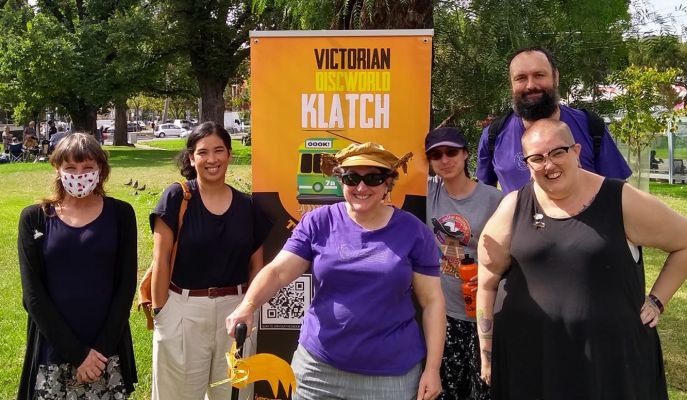 And some exciting news - A brand new group is starting up in the Newcastle (NSW) area. The inaugural meeting is to be held on Wednesday evening at 6 pm on March 30th at the Hexham Bowling Club. More details will be announced soon including a new Facebook group.

Want to connect in person with people who share your interest in all things Terry Pratchett?

Check our website for a group in your city. We are always looking for more groups to start up in the regional areas of your state. If you'd like to start a social group and are not sure how? Send us a message and we'll help you get started.

A day in the life of ... two Terry Pratchett fans tell us their story.

Suzie from Melbourne has been a Terry Pratchett fan for many years and was involved in the organisation of the very first Australian Discworld Convention in 2007 (as well as many others, and being the person in charge of the 2019 convention).

Suzie - I'm the person who failed everything. Year 11 I failed English, and, therefore, Year 11. Then I failed TAFE, then I failed Year 12. I was on a roll. Something turned me around a few years ago. I have since passed Year 12 and using my marks from that I ended up in Uni. Having failed English years ago I managed to get some really good marks at Uni in a BA majoring in Professional and Creative Writing. Other than that? Married, two children who I've conned into reading Pratchett and also conned into attending the Conventions.

Q2 - When did you first discover the Discworld and what was the first book you read of Pterry's?

Suzie - My first Discworld book was Sourcery. I didn't enjoy it and didn't read any more Discworld for years.

Q3 - After Sourcery, what about it made you want to pick up another?

Suzie - Funny thing is that I didn't really, not for years. I'd seen Truckers on TV, bought all three books in the Bromeliad Series and also Sourcery. Loved the trilogy, but didn't like Sourcery. A few years later I was looking for audiobooks, this is in the very early days of mobile phones so I was still looking for audiobooks on cassette tapes. There were not that many, so I picked up Hogfather and I was hooked. More books followed after that.

Q4 - You were involved with the very first Australian Discworld convention, how did that come about?

Suzie - It was 2004. I was bored, so bored I was washing the walls...literally. I'd discovered Usenet and was looking for the groups that fitted me while taking a break from washing walls. I found a couple of Pratchett groups. In reading through everything...remember, I was bored...I found someone called Pat advertising the first Australian Discworld Convention. 'That sounds fun' I thought. I emailed Pat, I guarantee I haven't been bored since.

And now meet Jessalyn from The Hunter Region of NSW

Jessalyn - My life is all about University and being a Mum. My Daughter is 2 years old and already in love with books. Between naps and playtime, I'm studying to be a Forensic Scientist.

Q2 - When did you first discover the Discworld and what was the first book you read of Pterry's?

Jessalyn - I have always been aware of Discworld, my Mum is a huge fan. I knew a lot of characters and jokes without having read a book. My first Discworld book was Wee Free Men when I was about 9 years old.

Q3 - What about Wee Free Men made you want to pick up another?

Jessalyn - I enjoyed reading about Tiffany and I wanted to know more about the Discworld characters mentioned by my Mum and siblings.

Q4 - You live away from Sydney, would you be likely to attend a fan-based social group (Discworld) if it were to happen near you?

Jessalyn - If it was near me, Yes!

A big thank you to Suzie and Jessalyn for allowing us to step into their heads. And nice to know we have a Cheery in the making to help solve the mysteries.

Celebrate Hogswatch all over again!

In case you have missed it, check out the Youtube videos from our Virtual Hogswatch event and the Lost Con including The Science of Hogswatch with Ian Stewart, and an interview with Andrew Baker, producer of the upcoming film based on The Amazing Maurice

Last but not least - Merchandise!

Would you like a fancy pin to wear on your shirt, jacket, kilt or spog? How about a lovely watch chain from your old friends in the Watch? Or just practice good hygiene with an Australian Discworld Convention face mask? All of these - plus some virtual merchandise for Virtual Hogswatch and The Lost Con - are available in our shop for a limited time only. Check them out!

Stay in touch and keep safe everyone!