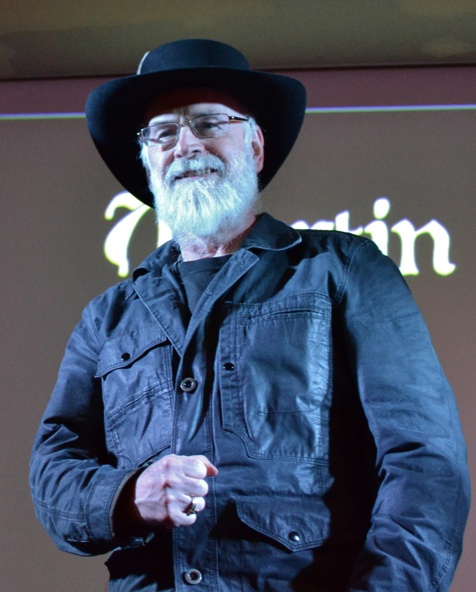 Born in Beaconsfield in 1948, Sir Terry Pratchett is one of Britain’s most successful authors with more than 65 million books sold worldwide in at least 37 languages. He is best known for the Discworld series, which comprises 41 books – the final one being The Shepherd's Crown, published posthumously in August 2015. By the way, this number doesn’t include all the Discworld spinoffs – the companions, the mappes, The Science of Discworld books, The Folklore of Discworld, the diaries, etc, etc.

In 2007 he was diagnosed with Posterior Cortical Atrophy, a rare form of early-onset Alzheimer’s disease. Since the diagnosis, he donated £500,000 to the Alzheimer’s Research Trust, and became something of a figurehead for dementia sufferers. In 2009 he gave the BBC Richard Dimbleby Lecture on the subject of assisted dying. He has appeared in the BBC documentaries “Living with Alzheimer’s” and “Choosing to Die”.

He was awarded the OBE in 1998 for services to literature and knighted in 2009 'in recognition of the huge impact his work has had across all ages and strata of society and across the world’.

In September 2015, the Sir Terry Pratchett Memorial Scholarship was presented to the University of South Australia, a perpetual scholarship worth AU$1,000,000 (or thereabouts), which will allow Masters students to share time between UniSA and Trinity College, Dublin, all done in Sir Terry's name.

With thanks to Colin Smythe, Rob Wilkins – and Sir Terry, of course.

For more detail about Terry and his work see his official website.